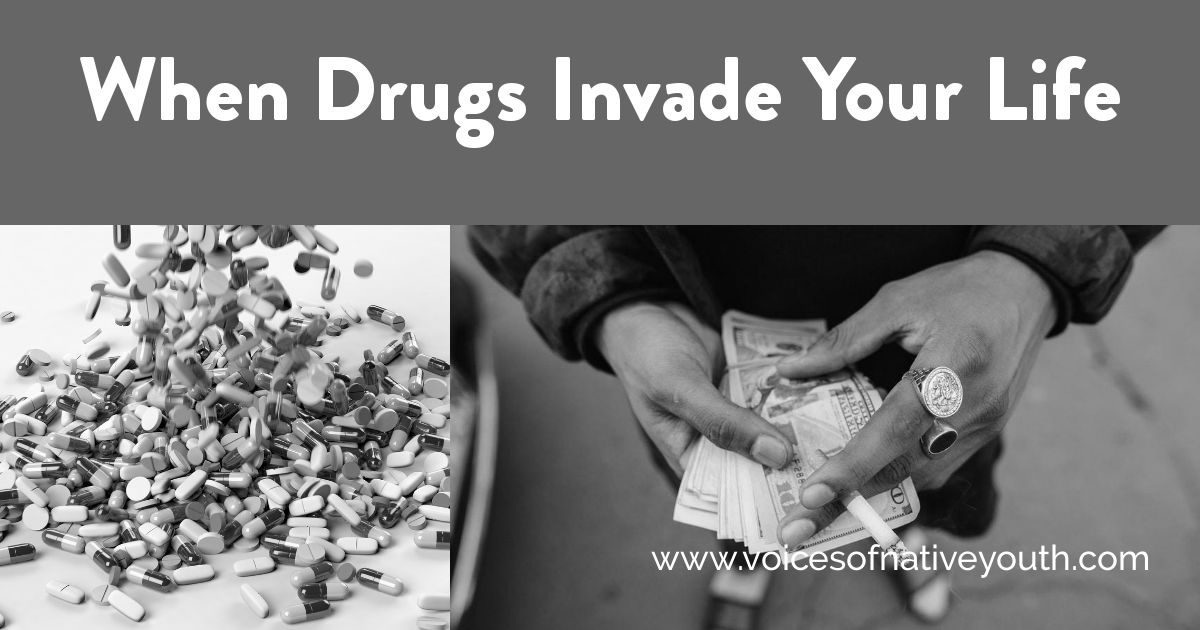 Do you know anyone who had potential and ruined it with drugs? My math teacher almost ruined his life with drugs. He told us what happens when drugs take over your life.

My math teacher (a veteran who likes to tell us stories to teach us lessons) told us the story of how when he got out of the army he turned to drugs and alcohol. He said, “Drugs distract you from reality.” He had goals after the army, but once he realized that drugs weren’t helping him achieve his goals, he quit using them. Now he’s a math teacher.

Drug Use Contribues to Suicide and Poverty

Drug use by Native American youth contributes to the cycle of poverty. According to a report for the Substance Abuse and Mental Health Services Administration, 36% of the Native Americans or Alaska Natives who died by suicide had legal intoxication rates. Another study cited in the same paper, “In a small 2007–2010 studyof White Mountain Apacheyouthages 15-24, 64% were “drunk or high” when they died by suicide, 75.7% were “drunk or high” during a suicide attempt, and 49.4% during suicidal ideation.” Suicides don’t just have an emotional toll on the family, either. Familes suffer financially as well.

Depression and substance abuse combine to form a vicious cycle that leads to suicide. According to DrugAbuse.com, “Using drugs impairs decision-making abilities and physically impairs people. This is a deadly concoction when on the job. In fact, 10-20% of American workers who die at work have a positive result when tested for drugs or alcohol.”  In other words, if you start using drugs and alcohol, you won’t live up to your full work potential. All in all, drugs don’t help you with a job, or your future dreams. Drugs contribute to poverty and suicide.

Drugs can ruin Native American families. According to Behavioral Health of the Palm Beaches, Inc. “Every single person in an addict’s immediate family (and at times extended family) is affected in some way by the individual’s substance abuse. Addiction impacts a family’s finances, physical health and psychological wellbeing.”  When parents use drugs, their children will likely follow in their footsteps.

Addiction would be more likely because the relatives and other family members that also had it in the past. So you would have to suffer from that as well. It also states in casapalmera.com, “Drug addiction runs through families, perhaps in part for genetic reasons, and in part due to environmental influence. If you have a blood relative who is addicted, especially a parent or full sibling, you have a higher risk for drug addiction.” In short, drugs can ruin families because drugs come with a cost of damage to families. Also, a family history of drug addiction puts Native youth at risk for becoming addicted, too. Families could break apart because of drugs.

The Health Risks of Drug Use

You could have health problems because of drugs or you could die. An article from americanaddictioncenters.com says, “People who struggle with addiction spend a great deal of their time intoxicated, on drugs, or trying to acquire more drugs; this means that they often neglect oral hygiene because they cannot afford a dentist or they simply stop caring about brushing their teeth.” You could have gum problems, which puts you at risk for heart disease. So, if you don’t die from the drugs, you could die from heart disease because the drugs make you stop caring for yourself. In conclusion drugs can cause gum problems, as well as heart and lung disease or worse.

Native American youth may not realize how bad drugs are for them. Drugs will derail our dreams by making it difficult for us to finish school or hold a job. Drug use can increase the chances that will take our own lives. Drugs become addicting and could ruin families as well. Drugs could also give you other health problems. You could ruin your gums or increase your risk of heart and lung disease.

In conclusion, drugs are bad for you because they won’t give you a job, they make it more likely that you’ll commit suicide, they become addictive, ruin families, and give you health problems.

9 thoughts on “What Happens When Drugs Take Over Your Life?”