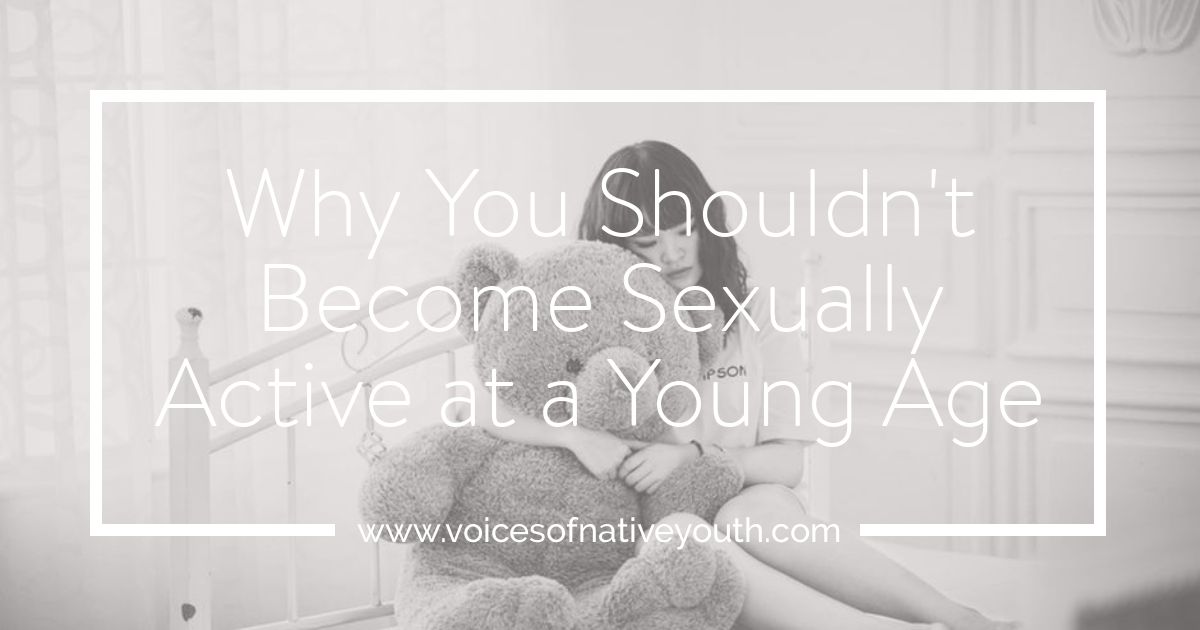 Native youth shouldn’t become sexually active at a young age because they are not ready for the consequences. The reality of being young and pregnant on the Rez is harsh. Young teens drop out of school. Having a baby might lead to unhealthy relationships, and the teen might end up having no support from the dad or their own family. It is a bad idea for native youth to become sexually active at a young age because lack of support, and men don’t cope well with the responsibilities of fatherhood at a young age.

But pregnancy isn’t the only problem with sexual activity at a young age. According to Miranda Hitti on Web MD, a sizable percentage of sexually active teens noted negative consequences such as feeling used, getting pregnant, and contracting a sexually transmitted disease. Young teens are not mature enough to insist on using birth control. As a result of not using brith control, you get pregnant. Therefore, Native youth shouldn’t become sexually active at a young age because of the consequences.

The teen might have a lack of support from family or friends. For example, I have a relative who became sexually active at a young age, got pregnant, and now she’s having a hard time. She has a lack of support from family, and she has dropped out of school. All the largest public schools on the Navajo reservation don’t have a program for teen parents or pregnant students (verified by calling the three major high schools).

On the other hand, many publics school in Arizona have a program for teen moms. I think that the Navajo reservation needs a program for pregnant or parenting students. A girl on the Rez will receive little help from school, therefore the teen is more likely to drop out.

Too Young to Cope

Native youth might not know how to cope with having a baby when they are still young. For example, my relative dropped out of school because she thought people were judging her. Therefore, she’s going to have a hard time. She stays at her mom’s house, she has no job, and she has no education.

An adult could have take care of the baby so my relative could finish high school. But she won’t listen. As a result, she has no job or education and is now suck with a baby to raise. As you can see, she is too young to make good decisions for her and her baby.

Native youth shouldn’t become sexually active because of the consequences. A girl on the Rez will receive little help from family or school, therefore the teen is likely to drop out. My relative was too young when she had her baby, therefore she struggles to make good decisions for her and her baby.