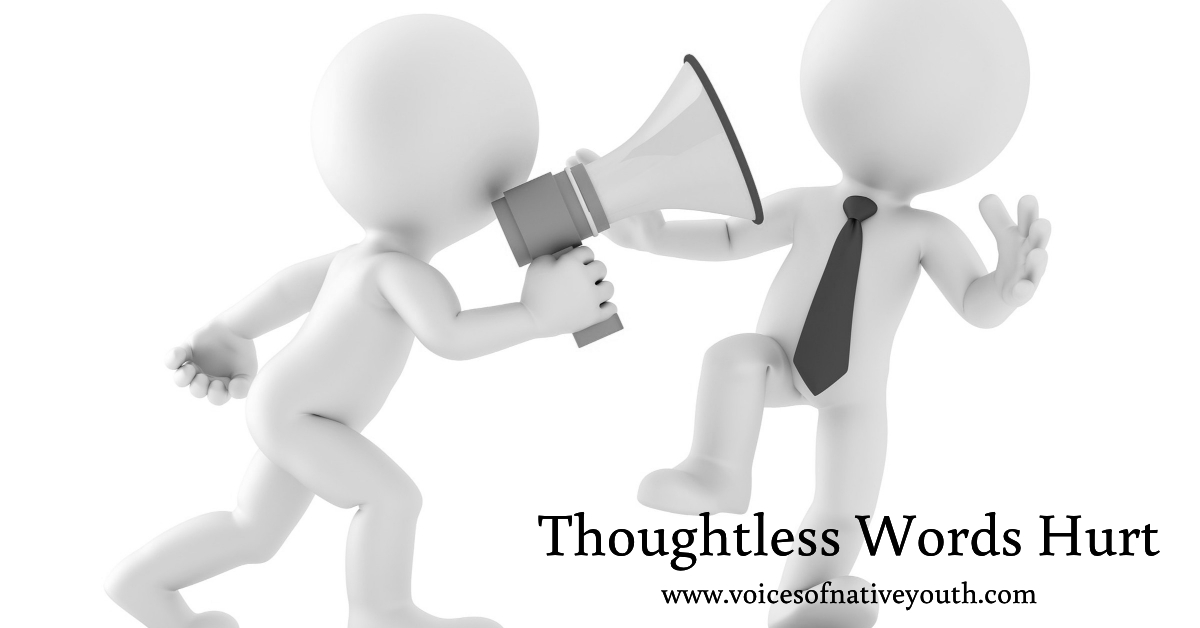 The Dangers of the Pygmalion Effect

People need to understand that their thoughtless terms can hurt Native Americans because words can create a negative, self-fulfilling prophecy. The Pygmalion Effect explains this process: if you think something will happen, you may unconsciously make it happen through your actions or inactions. It is the phenomenon whereby other’s expectations of a target person affects the target’s performance. For instance, when people think of Native Americans as drunks, then Native Americans are more likely to become drunks.

Alcoholism affects people from all walks of life. According to the National Institute on Alcohol Abuse and Alcoholism (NIAAA), more than 80,000 people die from alcohol-related deaths each year in the US. Statistics show that Native Americans are one of many groups with the most alcohol deaths.

Through the Pygmalion Effect, people’s thoughtless negative comments towards Native Americans can cause some Natives to identify themselves with the negative labels placed on them.

Speaking thoughtlessly can hurt Native Americans because casual words can affect how Natives see their own identity and culture. Calling a conversation among a group of Natives “a Gatherings of Nations” or “pow-wow” might do more harm than good.

When people call a conversation or hangout among Natives “pow-wow” or “The Gathering of Nations,” it shows a misunderstanding about Natives, their identity, and culture. For example, when an adult calls a small group of Natives ‘A Gathering of Nations’ then Native kids will call into question their own knowledge of their culture.

Non-Natives should be careful about using terms that make them feel as if they fit in or can relate to Natives when they really have no idea what they’re talking about.

Think before you speak. Words like 'squaw,' 'pow-wow,' and 'redskin' aren't funny. They show ignorance at best, and insult at worst. #nativeyouth #nativeamerican #microaggression Click To Tweet

What You Say Can Hurt YOU

People might not realize that using thoughtless terms can prevent character growth in the one who utters it. Prejudice affects the everyday lives of millions of people across the U.S. An individual’s prejudicial actions or opinion unnaturally forces on others (the targets of their prejudice) a false social status that strongly influences who they are, what they think, and even the actions they take.

Prejudice shapes what the targets of prejudice think about the world and life in general, about the people around them, and even the actions they take. Opportunities in life are lost and personal relationships are damaged when people act upon their prejudice.

When not acknowledged and confronted, prejudice negatively impacts the lives of not only the victims, but of those holding the prejudice. It can impose very dramatic barriers or invisible barriers on individuals. For instance, after the attack of Pearl Harbor in 1941, President Roosevelt distributed a number of executive orders, which were quickly turned into law, for the purpose of prohibiting any secret operations from those of Japanese ancestry who were living in the U.S at the time.

One of the orders gave permission to call certain parts of the country as “military areas” to keep Japanese people out of those areas regardless of their country of origin or citizenship status. This seriously impacted the rights of Japanese people who were living on American soil. Therefore, thoughtless terms can hurt Native Americans and prevent character growth in the one who is prejudice.

Dr. Seuss (pen name for Theodore Gisel) is one of those who fell prey to the hysteria and prejudice. In his job as a politicial cartoonist, he published numerous unflattering cartoons of Japanese Americans and Japanese people in general. He later realized that his prejudice had clouded his good sense. Dr. Suess’ book Horton Hears a Who is an apology for his behaivor.