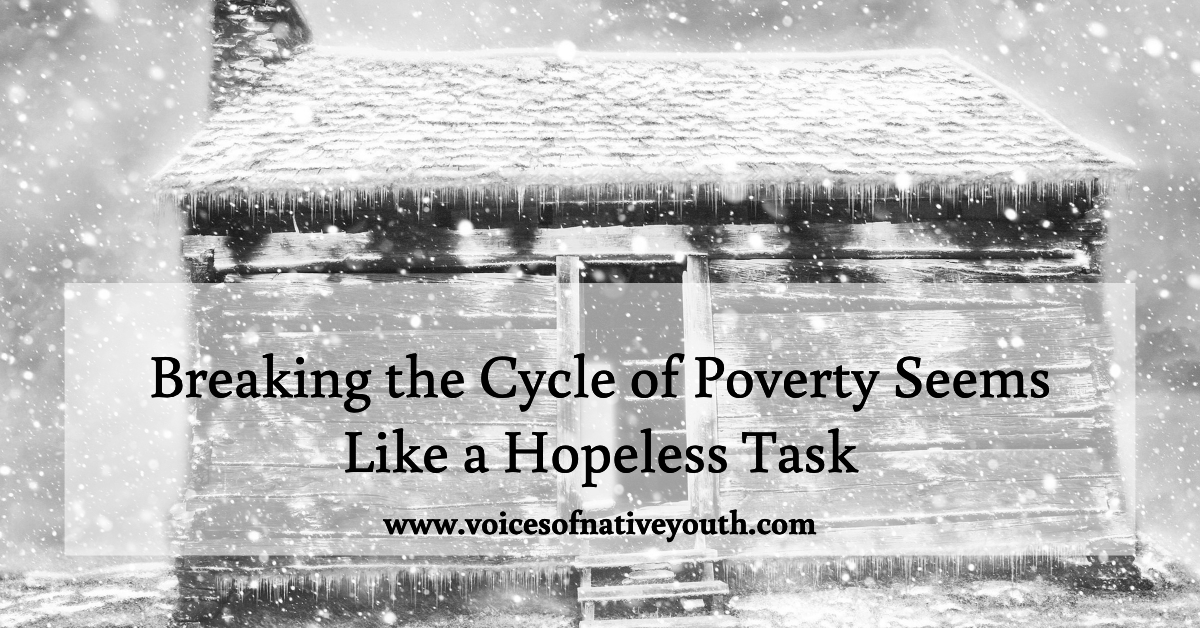 Native youth are subjected to all kinds of challenges and many hardships, but one thing is certain: poverty. It effects our Native youth in many ways. The reservation is full of the evidence of dysfunctional societies, from drunks to the chronically unemployed. The situation make Native youth feel helpless.

They are helpless because they are in careless and neglected environments. Kids who come from this environment look at themselves differently from other kids in modern society. What binds all of us like a silver cord is poverty, which many Native youth suffer from at this moment. Poverty is a horrible way to live, it gives Native American communities a poor economy, creates barriers to success, and the cycle endlessly repeats and starts over with new generations.

Kids live in poverty see themselves differently from other kids in modern society. #socialjustice #poverty #nativeyouth Click To Tweet

The Conditions of Poverty

One reason poverty thrives is the poor economy Native youth have to dealing with. My hometown is full of many drunks and unemployed people, because there aren’t enough jobs. I have alcoholic relatives who are unemployed and barely get by. There is little to no economic development on the reservation. For example, my community is building a new police station instead of a supermarket.

Poverty creates more criminal activity. Two people I knew were recently shot and killed on the reservation. An article in the New York Times says that “310 reservations have violent crime rates that are two-and-a-half times the national average. Sexual assault is four times higher than the national average, and 43% of the Navajo Nation lives under the poverty line. While the national average household earns $43,000 a year, the Native household brings in almost half of that with $24,000 a year. Therefore, having a poor economy can affect the children in the poor communities that they and their families live in.

The other reason why poverty thrives is the environment that stops poor people from achieving goals. According to Partnership with Native Americans, the national average number of people with diplomas is 82% while the average for Native youth is only 69% (and only 53% graduate from Bureau of Indian Education schools).  Only 13% of Native Americans have college degrees. When people are in poor environments they struggle to learn about the world around them, the world beyond the Reservation. Bad schools, poor homes, violence, and people with bad influence affect Native youth in their surrounding environment.

Kids Can Adapt, but Should They?

Native youth can easily adapt to poverty and lose hope of ever having a better life. If a child is surrounded and raised in a bad environment, the more likely they can adapt and live with it when they are older. Parents on the Rez like to have fun, especially poor parents. But you can hurt your child by these careless acts such as leaving your young children home alone, or being emotionally distant when your children need you. If parents are aware of that their aciton will hurt their children, maybe they’ll think twice before acting this way. Adults need to think of the bigger picture, and possibly consider moving to a place where your kids will thrive and grow healthy.

The Failure of Governments

The system of self-governmnet on reservations contributes to the continuaiton of poverty. The Navajo and other Natives don’t improve or thrive, which perpetuates a whole new generation of people living in the cycle of poverty. Native governments and the national government should make lives better for its citizens. But both governments seem to be failing to do that for Natives. Sometimes Natives rely too much on the government and don’t put in the effort to succeed and thrive. But maybe that’s because no one expects more of us.

The Rosenthal Effect (also known as the Pygmalion Effect) shows that the behavior of other people can affect people around them. For example, if adults don’t expect much of children, the children won’t do much. Because of how the cycle keeps going it will continue unless we do something about it.

We need to do something about the poverty that affects our Native youth today. A poor economy can affect the Native youth that dwell in a poor region or area, creating a poor environment for Native youth. We perpetuate the cycle by what we do and pass on to new generations.

Therefore, to ensure Native youth have a good future we need to get rid of the poor environments, break the barriers that stop them at key points in their lives, and stop the cycle of poverty from happening all over again. We need this for a better future for all Natives. Natives didn’t just survive all these hardships to be taken onto reservations and remain in a poverty. We survived and we will thrive with our hope for the next generation of Native American youth.

4 thoughts on “Breaking the Cycle of Poverty Seems Impossible”