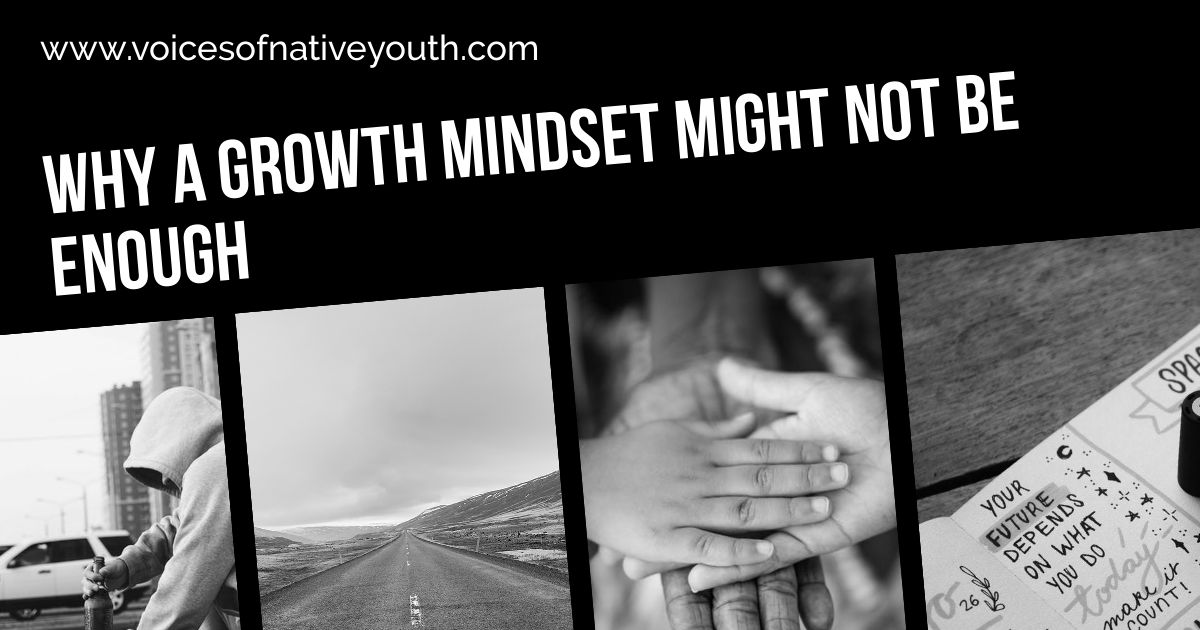 Native youth struggle with becoming successful even if they have the right growth mindset. One of my friend’s cousins has struggled, even though she had goals in life. People’s negative expectations kept pulling her down. She struggled because of the lack of resources in her family and eventually she wandered down the path of alcohol and drug use.

Her story made me think of why Native youth struggle so much. We might not reach our goals because of negative expectations, environmental factors, and lack of resources.

People’s negative expectations hold Native youth back. Projecting negative expectations onto Native youth puts the Pygmalion Effect into action. The Pygmalion Effect is when expecting certain behaviors makes them more likely to occur. A study on the Pygmalion effect (also referred to as the Rosenthal study), took place at an elementary school where students were given intelligence pre-tests. Twenty percent of the students showed potential for growth, but a group of students were actually randomly picked and placed in a class for exceptional students. All of the students showed growth when they retook the test, showing that when we expect students to do well, they will live up to our expectations.

The opposite can also happen. For example, when my older sister Kayla was in the fifth grade, her teacher told her, “Your sisters are better at math than you. You’ll be repeating middle school while your sisters go to high school without you.” Kayla struggled in school all because of a comment which unknowingly put the Pygmalion Effect into motion, causing her to get bad grades after she completed the fifth grade. Now that she’s at a new school, where everyone expects her to do well, she’s finally finding success. Putting your negative expectations on Native youth may not impact you negatively, but it does have a very negative impact on Native youth such as Kayla.

The Debilitating Effects of Poverty

We as Native youth are held back by our environment. According to a 2013 article on the American Psychological Association’s website, “In 2009, poor (bottom 20 percent of all family incomes) students were five times more likely to drop out of high school than high-income (top 20 percent of all family incomes) students.” An astonishing 33% of Native youth come from families living below the poverty line (compared to 14% of the general population). This means that Native students will have a harder time in school because they are suffering from the effects of poverty.

The type of environment that you live in affects your ability to achieve your goals. Poverty can not only impact school success but mental health, too. The stress of poverty can put a strain on a kid’s mental health with the constant worry of having sufficient funds to do well in school. Stress of poverty can also lead Native youth to drop out because they will need to help provide for their family. Poverty can impact not only school success, but mental health, too, which can hold native youth back from achieving their goals.

Native youth don’t have the resources we need to achieve our goals. Support from family is a resource Native youth often don’t have. Support from family isn’t very common because we really aren’t expected to go to college. Some of the Native youth’s family members expect them to stay home and watch over their younger siblings and take care of the house. Even if we choose to go to college, distance and financial support will make it even more difficult.

When I was younger my mother went to University of New Mexico (UNM), while we stayed at our grandma’s house, who was still living in Crownpoint at the time. My mom drove herself to and from the school for her classes, she also used student loans to pay for school which she is still paying off, but it was all worth it, because she is now a nurse. Native youth might not have the right resources such as support from family or financial support which could cause Native youth to struggle with achieving their goals.

We Have Dreams, Too!

Native youth feel like they aren’t able to achieve their goals because of several factors holding them back. Projecting your negative expectations onto us will make it more likely that we’ll fail. Poverty will make it more difficult for us to succeed, and it impacts our mental health. When we don’t have support from family or financial support, it makes it difficult to reach our goals despite our growth mindset. Native youth might struggle with these things, but we want to dream big and work hard so we can achieve our goals.